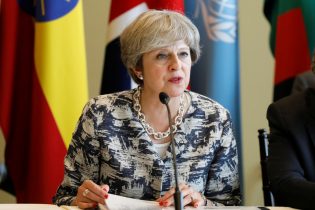 UNITED NATIONS (Reuters) – The leaders of Britain, France and Italy will push social media companies on Wednesday to remove “terrorist content” from the internet within one to two hours of it appearing because they say that is the period when most material is spread.

British Prime Minister Theresa May, French President Emmanuel Macron and Italian Prime Minister Paolo Gentiloni will raise the issue at an event on the sidelines of the annual gathering of world leaders at the United Nations.

Google will be represented by general counsel Kent Walker, who will also speak on behalf of a recently formed industry group called the Global Internet Forum to Counter Terrorism.

The European Union has threatened legislation if internet companies do not step up efforts to police what is available on the web.

The British U.N. mission said May will welcome progress, but urge companies to go “further and faster” to stop groups like Islamic State spreading material that promotes extremism or shows how to make bombs or attack pedestrians with vehicles.

“Terrorist groups are aware that links to their propaganda are being removed more quickly, and are placing a greater emphasis on disseminating content at speed in order to stay ahead,” May plans to tell the event.

“Industry needs to go further and faster in automating the detection and removal of terrorist content online, and developing technological solutions which prevent it being uploaded in the first place,” she will say.

Responding to pressure from governments in Europe and the United States after a spate of militant attacks, key firms created the Global Internet Forum to Counter Terrorism in June to share technical solutions for removing extremist content and work more with counter-terrorism experts.

Twitter said it had removed 299,649 accounts in the first half of this year for the “promotion of terrorism”, a 20 percent decline from the previous six months, although it gave no reason for the drop. Three-quarters of those accounts were suspended before posting their first tweet.

May said ahead of Wednesday’s event: “We need a fundamental shift in the scale and nature of our response – both from industry and governments – if we are to match the evolving nature of terrorists’ use of the internet.”