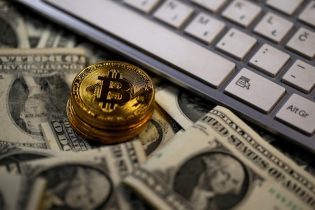 LONDON (Reuters) – Bitcoin blasted to another all-time high of almost $18,000 on the Bitstamp exchange on Friday, up 9 percent on the day, as warnings grew over the risks of investing in the highly volatile and speculative instrument.

The cryptocurrency’s staggering recent price rises — more than 1,700 percent since the start of the year — have driven worries that the market is a bubble that could burst in spectacular fashion.

Bitcoin has climbed almost 80 percent so far in December alone, putting it on track for its best month in percentage terms since December 2013.

While bitcoin has added another fifth to its value since Monday, trading has been slightly calmer than the wild price swings the market has seen in recent weeks, with volatility lower since the launch of bitcoin futures from Cboe Global Markets on Sunday.

Market-watchers said bitcoin’s price was being lifted by the launch of rival CME Group’s bitcoin futures contracts on Sunday.

“The hope (is) that futures signal the unlocking of institutional money into the digital arena and (that there will be) a rapid demand increase and ratification of the technology and its principles,” said Charles Hayter, founder of industry website Cryptocompare.

But outside of the crypto market, worries continue to grow about the amount of money piling into the space.

A study by Anglia Ruskin University, Trinity College Dublin and Dublin City University released on Friday said bitcoin could pose a threat to the financial stability of traditional currencies and markets.

“Our evidence finds that the price of Bitcoin has been artificially inflated by speculative investment, putting it in a bubble,” said Larisa Yarovaya, one of the report’s authors and a lecturer at Anglia Ruskin University.

“Although bitcoin is not regulated by governments, it could still have a knock-on effect on traditional markets due to the interconnectedness of cryptocurrency markets with other financial assets.”

Others, however, say bitcoin’s total market size — around $300 billion — mean the impact of any future price collapse would not be large enough to have a knock-on effect on financial stability.

The BBC reported late on Thursday that the head of Britain’s Financial Conduct Authority, Andrew Bailey, had warned that bitcoin buyers should be prepared for the possibility that they could “lose all their money”.

Outages on some of the world’s biggest exchanges this week, which left millions of investors unable to access their funds during periods when trading volumes are high, have also fueled concerns about the fragility of the market’s infrastructure.