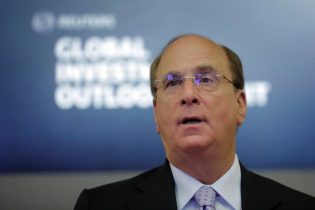 By Jennifer Ablan and Jonathan Stempel

NEW YORK (Reuters) – Bitcoin, whose value has fluctuated significantly this month, remains a “speculative” investment that thrives because of the cryptocurrency’s anonymous nature, BlackRock Inc

“The reason why it does so well is it is anonymous. It’s anonymous, and it’s cross-border,” Fink, whose firm oversees nearly $6 trillion of assets, said at the Reuters Global Investment 2018 Outlook Summit. “If you legitimize it, you know who your counterparties are…the question is how many people will use it if you have to acknowledge you are a buyer or a seller.”

Fink called bitcoin a “very speculative instrument. More importantly, it is an instrument that people use for money laundering.”

The value of bitcoin plunged as much as 29 percent from its Nov. 8 record high of $7,888 following the cancellation of a planned technology upgrade and amid persistent concern of a bubble. Bitcoin recouped some of its losses on Monday.

Investors who have held bitcoin for the long term have fared well.

Even after the recent drop, its value has increased more than sixfold this year. Investors who held on longer have been rewarded even more: in 2011, bitcoin traded at below $3.

Fink, however, said most investors with long-term horizons, and who are keeping “record amounts” on the sidelines, should be focused on traditional assets such as stocks and bonds.

He said that for a 30-year-old person, “100 percent equities is the right investment strategy,” at a time when the world’s economies are enjoying “synchronized growth” for the first time since the financial crisis.

Bitcoin “is tiny in the scheme of financial markets,” Fink said. Overall, “there’s too much focus on bitcoin,” Fink said. “I don’t know why it has so much fascination for the press.”