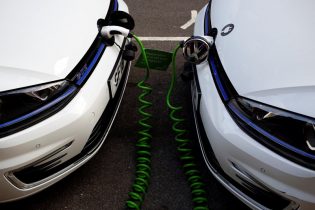 LONDON (Reuters) – Britain must plough billions of pounds into new power plants, grid networks and electric vehicle charging points if it is to avoid local power shortages when a planned ban on new diesel and petrol cars begins.

Supporting millions more battery-powered vehicles over the next two decades is technically feasible, and if drivers can be persuaded to recharge them overnight – when spare power capacity is abundant – the huge infrastructure cost could be kept down.

Local networks particularly face problems, so the country will need a range of technologies for managing consumption to meet an estimated rise of up to 15 percent in overall demand and prevent spikes of up to 40 percent at peak times.

“It will be a challenge and a lot of investment is required – in generation capacity, strengthening the distribution grid and charging infrastructure,” said Johannes Wetzel, energy markets analyst at Wood Mackenzie.

In July, the government said it would ban the sale of new petrol and diesel cars and vans from 2040. The aim is to reduce air pollution, a source of growing public health concerns, and help Britain to cut carbon emissions by 80 percent by 2050 from 1990 levels – the target it has set itself.

Although some conventional cars will remain on the road, numbers of electric vehicles (EVs) could balloon to 20 million by 2040 from around 90,000 today, experts estimate. Charging them all will require additional electricity.

Britain already faces a power supply crunch in the early 2020s as old nuclear reactors come to the end of their lives and remaining coal-fired plants are phased out by 2025.

Four years ago, well before the conventional car ban was raised, the government said over 100 billion pounds ($130 billion) in investment would be needed to ensure clean, secure electricity supplies and to reduce demand.

That looks optimistic. The cost of Hinkley Point C alone, the only nuclear power station now under construction in Britain, is estimated at 19.6 billion pounds.

Gas plants are cheaper and faster to build but investment in new ones is flat, and they still produce carbon emissions. Renewable energy presents problems of matching supply and demand; solar panels for instance produce no power in the night when drivers would ideally recharge their electric cars.

Estimates vary on future numbers of electric vehicles, as well as hybrids and those powered by hydrogen fuel cells which do not require mains electricity. However, several analysts surveyed by Reuters said anything up to an extra 50 terrawatt hours (TWh) would be needed for them by 2040.

Bernstein analysts say overall demand could increase by 41-49 TWh, or 13-15 percent of current levels. However, a 15 percent rise would translate into a 40 percent jump in peak demand if drivers charged their cars between 6 and 9 pm, when electricity consumption is at its highest.

This problem can be eased by encouraging charging at night, when demand is currently only about a third of during peak periods. “We do not see the transition to EVs as posing a significant stress on peak demand if charging were incentivized to happen at off-peak times,” they said.

Britain has made progress in energy efficiency. Overall and peak power demand fell by around 14 percent between 2005 and 2016, even though the economy grew by the same amount.

“There is definitely some slack in the transmission and distribution system to tolerate an increase in the peak demand,” according to Bernstein.

Its “extreme scenario” projection of a 40 percent rise in peak demand equates to 24 gigawatts (GW). But National Grid, which operates the transmission system, has said the rise in peak demand can be kept to 5 GW if there is smart charging and time-of-use electricity tariffs.

Such encouragement of off-peak EV charging by making power cheaper than at peak times of the day will be essential.

“A very large peak demand could be the outcome if other things don’t happen, such as smart grids, smart charging and energy storage, although we expect these technology solutions to be developed to support increasing power demand within sensible peak levels,” said Richard Sarsfield-Hall, director at Poyry Management Consulting.

While nationally there may be some slack, local grids and distribution networks could feel the pinch. A trial by Scottish and Southern Electricity Networks found that uncontrolled EV charging would double the usual domestic load to 2 kilowatts (kW) when using a 3.5 kW charger. More powerful chargers would exacerbate the load strain further.

The company’s head of asset management and innovation, Stewart Reid, said up to 30 percent of its local networks could experience problems such as power loss if 40-70 percent of its customers have EVs, based on 3.5 kW chargers.

Spreading out charging through the night could save around 2.2 billion pounds of expenditure in replacing or upgrading cables or transformers, he added.

Capacity problems could also start in the home. National Grid says that drivers charging their cars at home might not be able to use items such as kettles, ovens and immersion heaters at the same time without tripping their house’s main fuse. “The house electricity supply is one ‘pinch point’,” it said in a background article.

The piece raised another difficulty: it estimated that 43 percent of households have no off-street parking, meaning drivers could not recharge their cars overnight in their garage or driveway as they slept in their homes.

An alternative is more public power points at supermarkets, allowing cars to be charged while their owners shop inside. However, few drivers would probably want to buy groceries in the dead of night, the best time for easing grid loads.

Even if the grid can bear the burden, increasing charging points from the current 13,000 won’t be cheap.

All but one of Britain’s existing nine nuclear plants, which can together produce around 9 GW, are set to close by 2030 unless their lives are extended. On top of this, 12 GW of coal capacity will shut by 2025.

At the end of last year, gas-fired capacity totaled 32 GW and the government has said more such plants could help fill the gap left by coal. However, weak wholesale power prices have stunted new development.

Britain’s largest gas plant to open for three years, at 884 MW, came online last year in Manchester at a cost over 700 million pounds. But plans for a 2-GW gas plant nearby have stalled as the developer struggled to find investment for the 800 million pound project.

One risk is that by using this fossil fuel to meet extra power demand, Britain could end up emitting more greenhouse gases in charging EVs than conventional cars do already.

Norway has proportionately the largest EV fleet in the world, and in January they accounted for 37.5 percent of new car sales. However, the country relies on carbon-free hydropower for almost all electricity supplies.

The government has projected that almost 140 GW of generation capacity is needed by 2035 to replace ageing plants and as electricity demand increases. This is around 30 GW higher than current levels.

Sources could include onshore and offshore wind, gas, biomass, nuclear and power links with Europe.

But Britain has struggled to get nuclear projects built, mainly due to the high costs. EDF’s 3.2 GW Hinkley Point C plant is expected to be operational by 2025 at the earliest.

Much of the necessary investment will fall on the private sector. But experts say the state, including energy market regulator Ofgem, must ensure the country achieves a reliable mix of power sources and builds infrastructure such as more interconnectors. These links with continental Europe allow the import and export of power to match supply and demand.

“If we get an increase in renewables, interconnectors, some new gas and nuclear (plants), we can get the power required, but you need the government and Ofgem to help deliver that,” said Simon Virley, UK head of power and utilities at KPMG.

“And there is a question mark over localized pinch points and grid stability issues,” he added.

(For a graphic on Norway’s electric cars, click http://tmsnrt.rs/2wnEmNs)