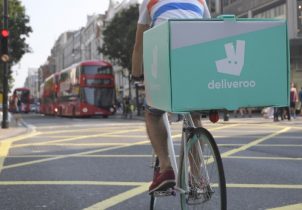 LONDON (Reuters) – British food delivery company Deliveroo has raised $385 million in private funding, it said on Sunday, as it prepares for expansion to help it compete with publicly traded rivals such as Delivery Hero and Just Eat.

The funding values the business at more than $2 billion and will allow Deliveroo to enter new markets, enlarge its technology team and expand its concept of delivery-only restaurants run out of centralized kitchens it operates, the company said.

The number of Deliveroo locations has risen by 60 percent over the past year and it now operates in more than 150 cities in 12 countries, a spokesman said. He declined to comment on its next expansion moves.

Besides Britain, where it operates in 60 cities and towns, it also offers food delivery in eight European countries, Australia, Hong Kong and the United Arab Emirates. It’s closest rival is the Foodora unit of Germany’s Delivery Hero.

“There is a lot of room to rethink how we eat,” said Martin Mignot, a partner at venture capital firm Index Ventures, which has invested in four previous Deliveroo funding rounds.

The company has raised $474.6 million since it’s founding in 2012, according to venture funding data from Crunchbase.

Like taxi app Uber, which was stripped of its London operating license on Friday, Deliveroo has been criticized by unions that say it is exploiting staff by not offering basic protections. Some of its delivery riders are pursuing legal action to push for workers’ rights.

Deliveroo has previously said it would give its self-employed riders insurance and sick pay if the government changed the law so that it could offer some, rather than all, the entitlements enjoyed by full-time staff members.

Revenue grew to 128.56 million pounds ($173 million) but delivery costs and administrative expenses resulted in an operating loss of 141.05 million pounds, up 367 percent year on year, it said in a filing with UK Companies House.

Though the company trumpeted a $2 billion-plus valuation, that remains less than half those of its listed rivals. Delivery Hero’s market capitalization is 5.95 billion euros ($7.11 billion) while UK-based Just Eat’s valuation is 4.66 billion pounds

(Reporting by William James in London and Eric Auchard in Frankfurt; Editing by Toby Chopra and David Goodman)