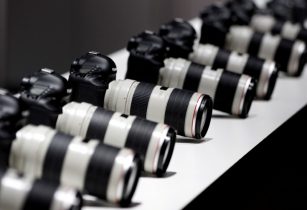 TOKYO (Reuters) – Japan’s Canon Inc said on Tuesday it expects operating profit to climb 27 percent in 2018 to its highest level in a decade, as it reaps the rewards of its efforts to diversify away from copiers and cameras.

That prediction beat a consensus estimate of 376.19 billion yen from 20 analysts polled by Thomson Reuters I/B/E/S.

At time when smartphones are increasingly replacing compact cameras for many consumers, Canon has sought to expand products for corporate clients. Its recent purchases include Swedish video surveillance firm AXIS and CT scanner and ultrasound equipment maker Toshiba Medical Systems.

Canon is also benefiting from a surge in demand for organic light emitting diode (OLED) screens in smartphones, with its OLED panel-making equipment unit flooded with new orders.

Expectations of a profit jump come despite Canon assuming a stronger yen for this year. It expects the Japanese currency to average 110 against the U.S. dollar, a rise of around 2 yen.