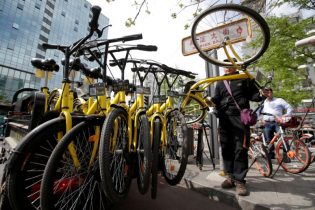 By Kane Wu and Julie Zhu

HONG KONG (Reuters) – Chinese startup Ofo is in talks to raise $1 billion in a new funding round led by Japan’s SoftBank Group, people familiar with the matter said, in what would be the largest fund-raising in the nation’s bike-sharing business.

Didi Chuxing, China’s biggest ride-hailing firm which counts SoftBank as an investor, could join Ofo’s new fundraising round，the sources told Reuters. Ofo could reach a valuation of close to $3 billion after the funding, one of the sources said.

Ofo and Mobike, China’s two largest bike-sharing startups, each has raised over $1 billion since late last year in a cash war to expand market share at home and overseas.

Ofo is seeking fresh capital less than a month after raising more than $700 million from investors led by Alibaba Group and two others, following rival Mobike, which in June announced a $600 million investment led by Tencent Holdings.

The latest Ofo investment plan has not been finalised, the sources said, who declined to be identified as the discussions are private.

Ofo did not disclose its valuation in the last funding round. Dai Wei, Ofo’s founder and CEO, had said in April the firm was valued at upwards of $2 billion.

Mobike’s valuation reached around $2.7 billion-$3.0 billion after the June funding round, according to three sources close to the startup.

Didi, already an investor in Ofo, has been increasing its influence at the company. Three of its senior executives joined Ofo this week, according to local media.

Ofo told local media on Wednesday it had named Fu Qiang, a former senior vice-president of Didi, executive president of the company but did not confirm the hiring of the other two.

For SoftBank, which recently launched a near $100 billion technology fund, an investment in Ofo would be another bet on China’s sharing-based economy that has already attracted billions in venture capital. The Japanese conglomerate in May agreed to invest $5 billion in Didi, putting an over $50 billion valuation on the Chinese company.

SoftBank’s potential investment in Ofo also comes after New York-based co-working space startup WeWork said on Thursday that it raised $500 million from SoftBank and several Chinese investors to set up a Chinese unit.

SoftBank and Didi are also investing in Southeast Asian ride-hailing firm Grab in its latest funding round, Reuters reported earlier this week.