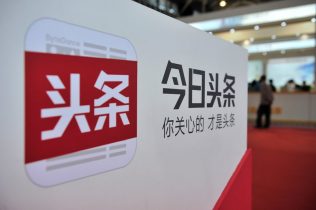 By Kane Wu and Julie Zhu

HONG KONG (Reuters) – Chinese news aggregator Toutiao, backed by Sequoia Capital and CCB International, is raising at least $2 billion at a valuation of over $20 billion in its latest funding round, people familiar with the matter told Reuters.

The fundraising comes after the startup raised $1 billion at a $11 billion valuation towards the end of 2016, according to two of the people.

U.S.-based private equity firm General Atlantic is among potential new investors and could be leading the round, one of them said.

The sources declined to be identified as the talks were not public.

Toutiao, founded by 34-year-old entrepreneur Zhang Yiming in March 2012, is one of the fastest-growing tech startups in China. Its valuation has leapt around forty-fold within three years – it was valued at just $500 million in June 2014, as customized news feed models become increasingly popular with China’s highly mobile population.

The news feed app, along with online services firm Meituan-Dianping and ride-hailing company Didi Chuxing, are collectively known as “TMD”, seen by some industry insiders and analysts as China’s next BAT, the country’s tech trinity of Baidu, Alibaba and Tencent.

It had about 175 million monthly active users and average users spent 75 minutes a day on the platform as of the end of 2016. Toutiao’s two biggest competitors in the market are Tencent’s Tian Tian Kuai Bao and Baidu’s newsfeed. Baidu, in particular, is hoping to capture some of the momentum created by Toutiao.