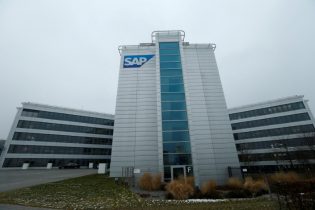 Cloud subscriptions and support revenue rose 27 percent to 932 million euros in constant currencies, below the 33 percent analysts, on average, had expected.

SAP Chief Executive Bill McDermott said some cloud deals which the company had expected to sign in second quarter had been delayed.

“The cloud story is completely intact,” McDermott told reporters. “The pipeline for (the third quarter) and beyond is fantastic.”

The world’s biggest maker of business planning software used by multinationals said research and development costs rose 19 percent, while sales and marketing costs were up 16 percent fueled by higher spending on its push into cloud services.

Including special items under IFRS accounting standards, operating profit fell 27 percent, weighed down by restructuring and stock option costs. The company has reorganized its customer services organization to focus more on its cloud businesses.

SAP expects to meet or slightly beat its 2017 financial targets, it said.

Those forecasts exclude the impact of currency swings, where a recent rise in the euro has slightly dented its international results.

“We expect continuing momentum in the second half and confidently raise our guidance for the full year,” CEO McDermott said in a statement.

Analysts expect a profit of 7.1 billion euros on revenue of 23.9 billion, a Reuters poll showed.

SAP, along with rival Oracle, must boost internet-based sales to head off pure cloud competitors Salesforce.com, Workday and Amazon.com’s web services unit, whose sales are all growing two or more times faster.

SAP also announced a planned 500 million euro share buyback to start shortly and to be carried out through the year. The stepped up repurchases reflect strong first half free cashflow.

(Reporting by Eric Auchard and Ilona Wissenbach in Frankfurt; editing by Edward Taylor and Jason Neely)