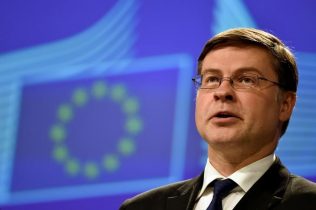 LONDON (Reuters) – The European Union’s executive has proposed a draft law to offer crowdfunding platforms bloc-wide access to customers as part of efforts to boost growth in the financial technology sector.

Crowdfunding allows start-ups to tap small sums of money from many individuals as an alternative to a bank loan, still the main source of funding for small and medium sized companies.

“An EU crowdfunding license would help crowdfunding platforms scale up in Europe,” the bloc’s financial services commissioner Valdis Dombrovskis said in a statement.

“It will help them match investors and companies from all over the EU, giving more opportunities for firms and entrepreneurs to pitch their ideas to a wider base of funders.”

The draft law is among the measures published by the commission on Thursday to encourage growth and job creation in fintech to wean the region’s economy off its heavy reliance on bank funding.

Britain, a top fintech hub in Europe, leaves the bloc next year and Brussels is keen to make the EU an attractive location for fintech firms. Without a favorable trade deal, UK-based fintech firms won’t be able to serve EU customers from Britain.

Currently there are no EU rules for crowdfunding, meaning they must deal with a patchwork of national rules, which can make operating in more than one country costly.

The EU draft law from the European Commission introduces an optional, pan-EU regime whereby a crowdfunding platform that wants to operate across the bloc could obtain a “passport” license from the European Securities and Markets Authority.

“Instead of having to comply with different regulatory regimes, platforms will have to comply with only one set of rules, both when operating in their home market and in other EU member states,” the commission said.

“For investors the proposal will further provide legal certainty as regards the applicable investor protection rules.”

The draft rules cover crowdfunding “campaigns” of up to a million euros over 12 months. Raising higher sums would come under the bloc’s existing prospectus and securities rules.