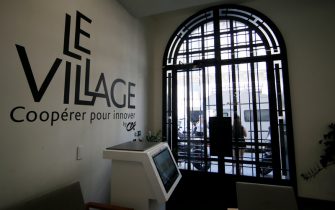 PARIS (Reuters) – France’s fast-growing fintech sector is optimistic the country’s dynamic new president will push it up the global rankings. But startups based in London do not yet seem ready to swap that key hub for Paris, even if they have French roots.

The nascent industry, ranging from mobile payment apps to “cryptocurrencies” like bitcoin, is seen by governments and business alike as crucial to the future of financial services and of vital importance, therefore, to economic growth.

Britain says fintech contributes $9 billion to the economy, provides 60,000 jobs and will continue to be a priority. But since last June’s vote to leave the European Union, other countries have been jostling to replace London as the sector’s main European hub.

Paris, with its huge financial sector, famous universities, and history of inventions such as world-wide-web precursor Minitel, might seem like an obvious contender. Of the top 10 European banks by global assets, four are French, and its fund management industry is also one of the biggest in the world.

Yet a recent Deloitte study ranked Paris 29th among global fintech hubs, and only seventh in Europe, thanks to a lack of investment, rigid labor laws and a reputation for being less international than other cities. London was top.

President Emmanuel Macron, a former investment banker voted in two months ago, wants to change all that. He has pledged 10 billion euros ($11.3 billion) to an innovation fund to help turn France into a “startup nation”.

Alain Falys, CEO of mobile payments startup YoYo Wallet, is based in a fintech co-working space in London’s Canary Wharf but is originally from northern France. For him, London was the “obvious choice” when he was choosing a base in 2013 and he will stay put, although he said he might consider Paris if starting out now.

“If Macron pursues his globalist, internationalist agenda – if he continues to visit incubators, speak in English, if he shows he’s really understood the force of labor reform in terms of job creation of this sector, he will draw in young people from all over Europe,” Falys said.

“(British Prime Minister) Theresa May will attract no one.”

Paris sees Britain’s expected departure from the EU, now being negotiated, as an opportunity to lure back some of the people it has lost to London.

But no one interviewed for this article, including lobbying group Paris Europlace and trade organization FranceFintech, knew of a company that was either moving from London to Paris or opening an additional office there since the vote for Brexit.

Some startups like Transferwise, started by an Estonian and one of Britain’s biggest success stories, have said they will open offices somewhere in the EU.

But many say London’s prowess in both finance and technology, as well as its internationalism and light-touch regulation, will make it hard to knock off the top spot, at least for now.

The French fintech sector raised less than a tenth of the venture capital raised by Britain in 2016 – $68 million compared with $783 million, according to Deloitte.

“We have the world’s greatest financial center and one of the biggest tech hubs in one global city – factors that cannot be replicated in Paris or anywhere else in Europe,” London’s deputy mayor for business and enterprise, Rajesh Agrawal, told Reuters.

London says that dynamic will not change, but Brexit is already affecting the city’s image elsewhere.

“We were envious, a bit scared of London,” said Andre Meyams, co-founder of BeeAm, an online asset management marketplace, at the sidelines of the “Fin & Tech Community” conference in Paris last month. “Brexit made people realize that Paris could be the future.”

The fact that Macron used to work as an investment banker, and was then economics minister, also comforts the fintech sector, which works alongside banks and other traditional financial institutions as often as it seeks to displace them.

Many banks have set up “accelerator” spaces, where they mentor startups and sometimes invest in them. Credit Agricole has one such space in Paris’s central business district called “Le Village”, where Bruno Van Haetsdaele, the founder of personal finance and budgeting app Linxo, works alongside 99 other startups.

Others say Paris’s focus on the domestic market make cities such as Dublin or Amsterdam more likely successors to London.

“What I love about London is it’s so international,” said Nikolay Storonsky, the Russian CEO of London-based foreign payments app Revolut. “Paris is not international at all.”

Many start-ups say the most crucial change that Macron can make is to shake up France’s labor laws, which they say have made it difficult to hire and fire employees.

“You need to be flexible when you’re a startup,” said ING’s head of fintech, Benoit Legrand, a Belgian who is based in Paris. “You need to be able to test different things out.”

Britain’s regulators have led the way in allowing startups to test out ideas in the real market, under supervision, with a so-called “regulatory sandbox”. It is a system that many countries have copied, though France is yet to put in place.