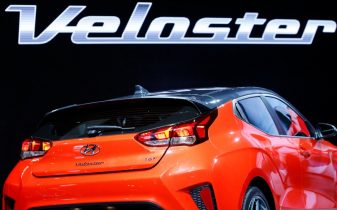 SEOUL (Reuters) – Hyundai Motor eked out a small 3 percent gain in quarterly net profit, but posted a fifth straight drop in annual earnings as a stronger local currency and weak U.S. and Chinese sales eroded the automaker’s bottom line for 2017.

While this was the first gain in quarterly profit in four years, analysts had been expecting it given a low base for comparison from a year ago. Hyundai’s operating profit for the three months to December 2017 slumped 25 percent.

Shares fell as much as 1.6 percent for the South Korean automaker, which has seen sales across its key markets suffer partly due to its delayed response to the rise in demand for sport utility vehicles (SUVs).

Hyundai, the world’s No.5 automaker along with affiliate Kia Motors Corp, reported a net profit of 1.03 trillion won ($971.61 million) for the fourth quarter ended December, in line with the 1.09 trillion won average estimate from 21 analysts polled by Thomson Reuters I/B/E/S.

For 2017, its net profit dropped to the lowest since at least 2010 after sales in China suffered a major setback due to a diplomatic spat between South Korea and Beijing over Seoul’s decision to deploy a U.S. anti-missile system.

The outlook for Hyundai’s sales in China, the world’s top auto market, has improved slightly given thawing diplomatic relations. But the company now faces the challenge of reducing its heavy reliance on sedans by launching more popular SUVs, such as the redesigned Santa Fe, amid long product cycles.

There are other headwinds too, such as a stronger won.

The won, which rose 7 percent against the dollar in the fourth quarter, reached its highest intraday level in nearly three and a half years on Jan. 8, hurting the price competitiveness of South Korean exports and eating into profits repatriated from overseas.

Hyundai and Kia expect their combined sales to climb 4 percent to 7.55 million vehicles in 2018, after falling short of their target for a third straight year in 2017.

Hyundai shares hit an intraday low of 154,000 won after the results were announced.

Kia Motors will report its earnings later on Thursday.