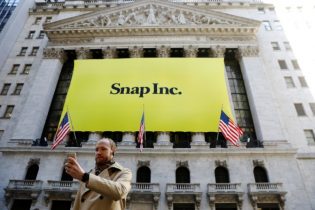 (Reuters) – Snap Inc, searching for ways to reinvigorate a slowing growth rate and increase advertising revenue for its Snapchat messaging app, said this week it has racked up 10 million users for its Discover news and video feature in France a year after launching there.

The figure, which has not previously been reported, is equivalent to about 15 percent of the country’s population.

Internationally, the Snapchat app has 173 million daily active users, the company said in August, while rival Instagram, owned by Facebook Inc, said this week it has 500 million daily users.

Snap’s partners in France such as Le Monde and Cosmopolitan, which supply video and news for the Discover feature, were getting “significant” revenue from ads, Nick Bell, Snap’s vice president of content, told Reuters, without giving an exact figure.

Snap, which generates revenue from advertisers, shares that revenue 50-50 with its publisher partners.

The company has yet to turn a profit since its messaging app launched in 2012. Since its initial public offering in March, its shares are down almost 18 percent, to around $14 per share.

France was the first international launch of Discover. It has also been released in Germany, the Middle East and North Africa, but the company is taking a slow, deliberate approach to expansion as it works at developing strong partnerships with publishers, said Bell.