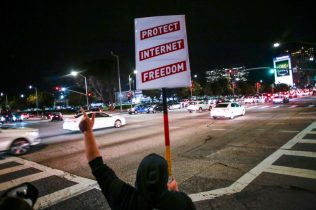 WASHINGTON (Reuters) – The Internet Association, whose more than 40 members include companies like Google and Amazon, urged the Federal Communications Commission on Wednesday to delay a vote to repeal a 2015 order banning internet providers from blocking or throttling online content.

The FCC is expected to vote on December 14 to scrap landmark 2015 rules approved during the Obama administration to ensure a free and open internet. The proposal is led by FCC Chairman Ajit Pai, a Republican.

In a letter to Pai, Internet Association President Michael Beckerman asked for the vote to be delayed, or for the five commissioners to vote down the measure.

The request followed calls by officials such as New York’s attorney general and FCC Commissioner Jessica Rosenworcel for the vote to be delayed after allegations of fake comments submitted to the FCC on the issue.

“IA and its members will continue our fight to preserve the 2015 Order and its strong, enforceable net neutrality

protections,” Beckerman said in the letter.

Pai and the two Republican commissioners have said they would vote for the measure while the two Democratic FCC commissioners oppose it.