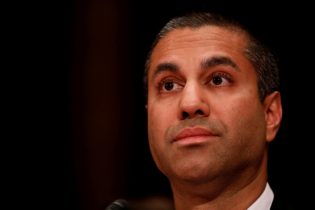 In a letter dated on Monday, the companies urged FCC Chairman Ajit Pai to reverse course and vote against changing the rules.

Pai, a Republican appointed by President Donald Trump in January, unveiled plans last week to scrap landmark 2015 rules intended to ensure a free and open internet, moving to give broadband service providers sweeping power over what content consumers can access. The FCC is set to vote on Dec. 14.

The companies, which sent the letter on Cyber Monday to coincide with the biggest online shopping day of the year, argued that slowing access to content, called “throttling,” or blocking it altogether, would hurt the U.S. economy.

“This would put small and medium-sized businesses at a disadvantage and prevent innovative new ones from even getting off the ground,” the companies said in the letter.

Pai defended the change as a way to remove heavy-handed internet regulations.

“The internet and companies like Twitter, which signed the letter, thrived under the pre-2015 light-touch regulatory framework that governed Internet access. Chairman Pai wants to return to that framework so that we can increase investment in broadband networks and connect more Americans to the services that these companies offer online,” FCC spokesman Mark Wigfield said in a statement.