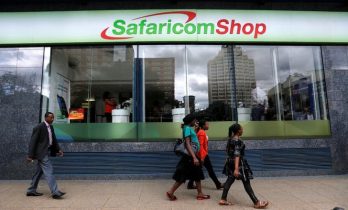 NAIROBI (Reuters) – Kenya’s telecoms regulator has ditched a proposal to break Safaricom up into separate telecoms and financial services businesses due to its dominant size, Kenya’s Business Daily newspaper said on Wednesday.

An initial draft report on boosting competition in the sector, which was leaked in February 2017, had recommended the break up of the firm that is Kenya’s biggest by market value.

Business Daily reported the proposal had been dropped from a revised version of the report, which has been circulated to operators for comments.

The regulator Communications Authority of Kenya (CA), which had already said it would not break up any firm after a huge outcry following the initial draft report, was not immediately available when Reuters sought comment on the report.

It dwarfs the two other operators in the mobile market: the local subsidiary of India’s Bharti Airtel and Telkom Kenya, owned by London-based Helios Partners.

The smaller operators have long argued that Safaricom enjoys a dominant position because it accounts for 90 percent of revenues in areas such as voice calls and text messages.

Safaricom rejects the claims of dominance and it has in the past accused the regulator of being preoccupied by helping its smaller rivals rather than focusing on consumers.