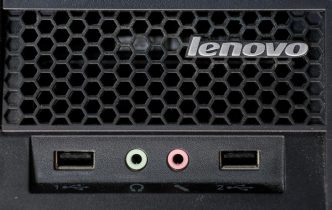 HONG KONG (Reuters) – Lenovo Group <0992.HK> said it had reached an agreement to buy a 51 percent stake in Fujitsu’s <6702.T> personal computer unit for up to $269 million, after earlier posting a lower quarterly profit on continued difficulty in the global PC market.

Shares of the Chinese PC maker rose as much as 5 percent as traders came back after the midday break. Lenovo and Fujitsu had first announced in October 2016 that they were exploring cooperations in their PC business.

Earlier in the day, Lenovo reported a profit of $139 million for the second quarter ended September, versus $157 million a year ago. A taxation gain of $118 million helped earnings beat an average analysts’ estimate of $44 million.

PC makers around the world are struggling as consumers switch to mobile devices. Data from Gartner shows that worldwide shipment of personal computers fell 3.6 percent from a year ago in the third quarter of 2017, the 12th such decline in a row.

Lenovo’s struggling mobile business group, which it is looking to turnaround in the second half of this fiscal year, reported a narrower operating loss before taxation of $261 million for the interim period.

Loss at its data center business widened to $214 million.

Lenovo warned market conditions would remain challenging in the short term, but said the agreement with Fujitsu would help it enhance its business globally.