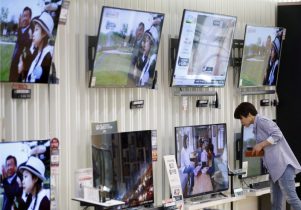 The investment comes as the Apple supplier reported second-quarter operating income soared more than 18-fold from a year earlier as it benefited from a more profitable product mix of screens for ultra-high definition TVs and other high-end panels.

The plans cover investment in domestic production facilities and includes a firm commitment to spend 7.8 trillion won ($7 billion) domestically by 2019.

“The customer base for OLED TVs and signage displays is expanding, alongside rapidly increasing OLED demand from the mobile and automotive markets,” LG Display said in a statement.

Around 2.8 trillion won will go towards a new line for large-size OLED screens while 5 trillion won is earmarked for a separate new line for flexible OLED aimed at bolstering its position in auto displays and smartphones. Both production lines will be located in Paju, northwest of Seoul.

It also said separately that it would invest in large-size OLED production in Guangzhou, China, to respond to fast-growing demand for the screens in TVs in overseas markets. The company already has an LCD panel production plant in Guangzhou that began mass production in 2014.

The new China production facilities will be established through a joint venture with 2.6 trillion won in capital, of which LG Display will hold a 70 percent share.