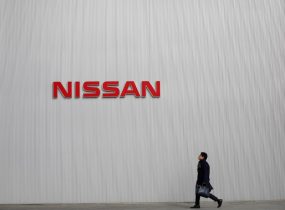 Nissan and DeNA said they would hold public tests over a two-week period in Yokohama in March, under which riders can use an app developed by DeNA to summon self-driving versions of Nissan’s Leaf electric cars to travel to pre-mapped destinations and pay fares.

The duo, which have been conducting field tests of their “Easy Ride” system since joining hands earlier this year, said the tests were the first step towards their goal of launching a full-service, self-driving ride-sharing service in the country in the early 2020s.

Global automakers are looking beyond making and selling cars to survive an industry which is being quickly transformed by new services, and a growing number including General Motors Co are applying their expertise in automated driving functions for mass-market cars to develop mobility services.

The fast-growing “pay-per-ride” market is becoming a battleground between automakers, tech firms such as Alphabet Inc and Uber Technologies Inc [UBER.UL] and a barrage of start-ups as ride-sharing services threaten to hit demand for car ownership.

While companies continue to pursue development of safe self-driving functions which can ferry riders to their destination of choice, they also face regulatory hurdles, as most global jurisdictions do not expressly authorize vehicles to operate on regular roads without a driver.

In Japan, Nissan and DeNA will face competition from Japanese robotics maker ZMP Inc, which is working with a Tokyo taxi operator to develop a self-driving taxi service it hopes to have up and running during the 2020 Tokyo Olympics.

DeNA has been trialing self-driving services across the country, including shuttle buses for elderly residents in rural communities which are struggling with fewer bus and taxi services as the country’s population ages and shrinks.