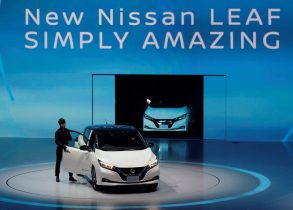 The new Leaf, on sale in Japan from Oct. 2 and elsewhere early next year, has a range of about 150 miles (241 kilometres) on a single charge according to U.S. environmental regulator estimates, up from its predecessor’s 107 miles thanks to a bigger, 40 kilowatt hour (kWh) battery.

At an event to launch the model, Chief Executive Hiroto Saikawa said a longer-range version of the Leaf to be launched next year would carry an even bigger, 60 kWh battery. That would give it a range of “more than 300 miles”, he said, without specifying which standards were used to calculate the distance.

The launch comes after luxury electric car maker Tesla made its first foray into the Leaf’s more affordable price band in July with its $35,000 Model 3 boasting a range of 220 miles.

Industry experts have said a range of over 250 miles at a price of around $30,000 would be needed to see a significant shift to EVs targeting the mass market – criteria next year’s longer-range Leaf might reach.

“If it’s successful, the Leaf will be a major part of the portfolio of Nissan,” Saikawa said. “EVs will no longer be a niche product.”

Nissan’s marquee electric model has had a sporty facelift and the Japanese version is packed with the latest automated functions including single-lane highway driving and self-parking, along with its combined accelerate and brake “e-pedal”.

The car will continue to use lithium-ion batteries from Automotive Energy Supply Corp, a battery maker which Nissan began as a joint venture with NEC Corp <6701.T>. Nissan sold the business to Chinese investment firm GSR Capital last month.

But for all the improvements, analysts said EVs’ range remains insufficient to lure a meaningful number of drivers, particularly in the U.S. where gasoline prices are historically low, limiting EVs’ appeal to the affluent and environment-conscious.

“Until we see a significant improvement in range and/or economics that feed through to a rise in gasoline prices, EV buyers will be buying for environmental or altruistic reasons,” said Janet Lewis, head of Asia transportation research at Macquarie Securities. “It’s still a very, very niche market.”

Nissan was one of the first automakers to mass market an EV in 2010 with the first Leaf, now the world’s best-selling all-battery car.

Just 2 million EVs were registered worldwide as of 2016, according to the International Energy Agency. That compared with the 80 million non-commercial vehicles sold last year alone. To date, Nissan has sold 280,000 Leafs and, since 2012, 80,000 units of sister model Zoe developed with Renault SA