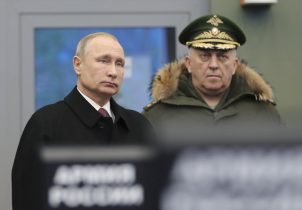 MOSCOW (Reuters) – President Vladimir Putin said on Monday the Russian authorities should monitor the activity of “some companies” on social media during next year’s presidential election and assess the extent of their involvement in domestic politics.

He did not name the companies or say if he was concerned about the activities of foreign or local firms, but Russia has been accused by the United States and other Western nations of meddling in their elections.

“We need to look carefully at how some companies work in internet, in social media, and how widely they are involved in our domestic political life,” Putin said, speaking at a meeting with leaders in Russia’s parliament about a new “foreign agents” law.

Putin signed a law last month allowing the authorities to designate foreign media outlets as “foreign agents” in response to what Moscow said was unacceptable U.S. pressure on Russian media. Once designated, such firms need to provide details to the authorities on, for example, their sources of funding.

“It should be carefully analyzed how they are operating and will be operating during the presidential election,” he said, but said this should not “narrow the space” for freedom on the Internet.

Polls show Putin, 65, who has dominated Russia’s political landscape for the last 17 years, on course to be comfortably re-elected in March, 2018, making him eligible to serve another six years until 2024, when he turns 72.

Russian opposition leader Alexei Navalny was barred on Monday from running in next year’s presidential election after officials ruled he was ineligible to take part due to a suspended prison sentence he says was trumped up.