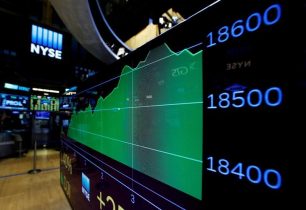 (Reuters) – SS&C Technologies Holdings Inc said on Thursday it would buy DST Systems Inc in a $5.4 billion deal, expanding its financial technology software prowess through its largest deal to date.

SS&C’s offer of $84 in cash for each DST share represents a premium of 29 percent to the stock’s closing price on Tuesday, a day before Reuters reported the companies were in advanced talks.

The report sent DST’s shares surging nearly 23 percent on Wednesday, while SS&C’s closed up 12.8 percent. Both stocks jumped to record highs on Thursday, before easing to trade up about 5 percent each.

The deal is Windsor, Connecticut-based SS&C’s latest in its quest to build out its financial software expertise that serves banks and the investment industry. It also gets an entry into the healthcare information technology market.

SS&C Chief Executive Bill Stone said in a statement that the combination would better meet the demand for outsourcing in financial services and help its clients address competitive and regulatory pressures.

Morgan Stanley analysts said investors should not be too concerned with DST’s lower margins, particularly within financial services.

Given that the combined SS&C-DST will get its revenue mainly from the United States, it will also benefit from the recently enacted tax reforms, JP Morgan said in a research note.

SS&C said it plans to fund the acquisition and refinance existing debt with a combination of debt and equity. It expects the deal to immediately add to adjusted earnings, before synergies, after closing in the third quarter.

Excluding DST’s debt, the transaction is valued at about $5.06 billion, according to Reuters calculations.

(Reporting by Munsif Vengattil and Arjun Panchadar in Bengaluru; Editing by Savio D’Souza and Richard Chang)