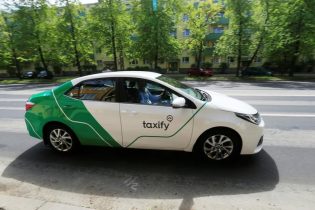 FRANKFURT (Reuters) – Estonian start-up Taxify is to go head to head with Uber [UBER.UL] in London’s highly competitive taxi-hailing market, and also has Paris in its sights.

Taxify said it will launch services across London on Tuesday after signing up 3,000 private hire taxi drivers, who have been vetted to ensure they meet local licensing requirements.

It marks a major move forward for Taxify after missteps by the Silicon Valley giant already allowed it to make inroads in several cities in central and eastern Europe and Africa.

In London, it enters a crowded market where the city’s famous black cab taxi drivers and private hire taxi firms such as Addison Lee compete with ride-hailing apps including Gett and Hailo, which is now part of Daimler’s MyTaxi. Uber counts 40,000 drivers and has 3 million London users, who take 1 million trips a week.

Taxify is a fraction of Uber’s size – being active in just under 25 cities compared to Uber’s presence in nearly 600 cities worldwide – but runs on a lower cost business model, allowing passengers to pay marked-down fares and letting drivers retain a bigger share of the profits.

Taxify said on Monday it would take a 15 percent commission on rides booked through its online platform, versus the 20-25 percent Uber charges in London. Taxify also said it will accept cash as well electronic payments from riders, unlike Uber.

“We will always be cheaper than Uber,” company founder and Chief Executive Markus Villig said in a telephone interview with Reuters.

Uber has struggled over the past year with legal setbacks, workplace harassment scandals, driver protests and bitter disputes among directors. Over the past year it has pulled back from China, Russia and several eastern European countries, while retaining minority stakes in joint ventures in those markets.

In a bid to stabilize the company, it fired its pugnacious co-founder and chief executive Travis Kalanick in June and last week named Expedia Inc CEO Dara Khosrowshahi to lead the company. (http://reut.rs/2vEtVXa)

From its home base in the Baltics, Taxify first staked out major cities in central and eastern Europe. Over the past year, it has vaulted into several of Africa’s biggest cities, where Villig says he expects to overtake Uber by the end of 2017. (http://reut.rs/2iUoJIK)

Bolstered by recently announced financial backing from China’s DiDi, Taxify aims to expand into five more cities by the end of the year, including Paris, Villig said in a phone interview. (http://reut.rs/2eVl0qa)

DiDi Chuxing, China’s largest ride-hailing firm, is seeking to turn up the heat on ride-sharing pioneer Uber via a string of deals with regional rivals in Southeast Asia, the Americas, Europe, the Middle East and Africa.(http://reut.rs/2iUTDRc)

“Ride-sharing has been monopolized by Uber,” Villig said. “Now it is getting clear that in most markets there will be major competitors.”

“Competition is a good thing as it raises service levels across the board,” an Uber spokesman said in a statement.