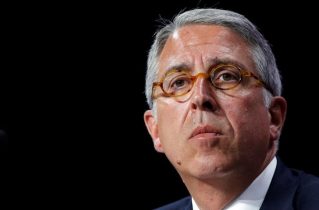 MILAN (Reuters) – Telecom Italia’s (TIM) fixed-line network is a strategic asset and the group is examining the dossier with the national government to find a shared solution, chairman Arnaud De Puyfontaine said in a daily on Friday.

“For us the network is strategic,” De Puyfontaine said in an interview to la Repubblica, adding a separation of the network could make sense to create an even more neutral platform for all companies and reduce the digital gap in the country.

“(CEO Amos) Genish and I are working on this front with pragmatism. We understand the national interest, we will examine the dossier with the government: the important issue is to meet the interest of all stakeholders,” he said.

De Puyfontaine added that it was “premature” to discuss the possibility of new shareholders joining the backbone network, amid speculation that state holding Cassa Depositi e Prestiti could take a stake if the network is spun off.

Asked whether competition between Telecom Italian and rival Open Fiber to roll out ultra-fast broadband was damaging, he said competition was always a good thing.

The chairman added that French media group Vivendi was in talks with private broadcaster Mediaset to resolve a legal dispute between the two groups.