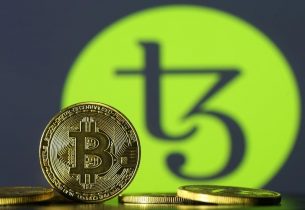 LAS VEGAS (Reuters) – The creators of an embattled cybercurrency technology project called Tezos expressed regret on Tuesday about their ongoing dispute with the head of a Swiss foundation that controls the $232 million they raised in one of the largest “initial coin offerings” ever.

In their first public appearance since Reuters detailed the controversy in a report last week, Arthur and Kathleen Breitman described their feud with Tezos Foundation President Johann Gevers over control of the project as unfortunate.

“I mean, it stinks – it stinks,” Kathleen Breitman said while sitting next to her husband on a panel at the Money20/20 technology conference in Las Vegas. “Like, we’re both really embarrassed about the situation, but we trust the process that we put in place and I think it will be resolved in due course.”

The Breitmans helped establish the Zug-based Tezos Foundation to handle their coin offering and develop a new transaction system that the money would be put toward. Under Swiss law, the foundation is supposed to be independent.

However, the Breitmans have been trying to oust Gevers after an extended battle over who controls resources tied to Tezos, and how to use them. Gevers has said he has no plans to leave.

Coins linked to the project, called “Tezzies,” do not yet exist, but contracts on their future value have fallen sharply since the battle came to light.

The dispute has highlighted the risks in the current frenzy over initial coin offerings (ICOs) which have raised more than $2 billion this year. ICOs are an unregulated means of crowdfunding in which a new cryptocurrency is sold to investors in exchange for legal tender or other cryptocurrencies such as Bitcoin to raise funds for startup companies.

Since the Reuters report last week on the dispute, the Breitmans posted a statement online saying Gevers had been “suspended.” (reut.rs/2yGk6IT)

On Tuesday, a spokesperson for the couple said they had been notified that “a majority of the board has asked Johann to be relieved of his operational duties and, to the best of their knowledge, he has been.”

But two of the foundation’s three board members, Guido Schmitz-Krummacher and Gevers himself, told Reuters he cannot be suspended without holding a board meeting, which requires 30 days’ notice. A spokesman for Switzerland’s Federal Department of Home Affairs, which oversees the agency that supervises foundations, confirmed the process.

In the Tezos fundraising, participants were told they were not making an investment, but a “non-refundable donation” to the Tezos Foundation, which is seeking not-for-profit status.

Regulators around the world have been giving closer scrutiny to ICOs, with the U.S. Securities and Exchange Commission (SEC) stating in July that some of the coins, also called tokens, may be considered securities subject to federal rules and regulation.

Tezos organizers say its coins cannot be issued until the underlying technology operates. The Breitmans have said their “current best estimate” for the launch is next February, but it will only happen when the computer network is ready.

While the foundation holds all the ICO funds, the Breitmans still control the Tezos source code through a Delaware company called Dynamic Ledger Solutions Inc (DLS). The Tezos Foundation is supposed to acquire DLS, but when that will happen is unclear.

According to the Breitmans, DLS shareholders have up to two years to exercise a contractual option to sell their shares to the foundation. That period begins two months after the network launches. If the option is not exercised, the foundation can buy DLS for up to a year.

Those stipulations, which were not disclosed to the ICO participants, mean it could take more than three years to complete the sale.

During the panel on Tuesday, the Breitmans did not provide an update on timing. The moderator, Meltem Demirors, who invested in the project, asked what they had to say to investors. “Bear with me,” Arthur Breitman responded.

In theory, Tezos would be able to log and process all kinds of transactions in a faster and more secure way than most current systems, using a technology called blockchain that underpins other digital currencies, such as bitcoin.

Some banks and other financial technology companies are also developing blockchain to use not only for cryptocurrency trading but mainstream financial transactions.

Several contributors to the Tezos fundraising interviewed by Reuters expressed concern about the dispute between the Breitmans and Gevers, but most said they were still hopeful the project will succeed.

Emin Gun Sirer, a Cornell University associate professor in the computer science department who is a Tezos technical adviser, said he continues to believe the network is still “technically sound.”

“I hope that they can sort out their issues and start delivering on it,” he said.