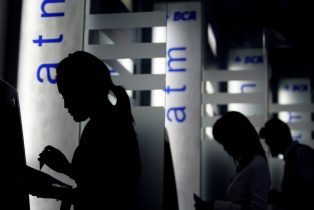 JAKARTA (Reuters) – Thousands of ATMs and electronic card payment machines in Indonesia went offline over the weekend, and it might take two more weeks before full service is restored, after an outage from a satellite belonging to state-controlled telecom giant PT Telekomunikasi Indonesia (Telkom).

Around 15,000 ground sites across Indonesia were affected by the problem on the ‘Telkom-1’ satellite, whose service is used by government agencies, banks, broadcasters and other corporations, Telkom’s president director Alex Sinaga told reporters on Monday.

A shift in the direction of the satellite’s antenna, which was first detected last Friday, had disrupted connectivity.

Bank Central Asia (BCA), Indonesia’s largest bank by market value, had around 5,700 of its ATMs affected by the outage, or 30 percent of the total operated by the bank, BCA chief executive Jahja Setiaatmadja told reporters. The Internet connection in some remote BCA branches were also affected, he said.

State-controlled Bank Rakyat Indonesia said around 300 of its ATMs were affected, but some had since been restored.

Some shoppers in Jakarta said stores could not process credit card payments using EDC (electronic data capture) machines over the weekend, while Twitter users complained about a number of ATMs that were not online yet on Monday.

According to central bank data, there are more than 100,000 ATM machines in Indonesia.

“Our estimation is by September 10, all (connections to) 15,000 sites would be recovered,” Sinaga said. Up to Monday, around 17 percent of the connections had been restored, he added, by shifting connections to other satellites and adjusting the direction of ground antennae.

Telkom-1, which was launched in 1999, has a design lifetime of 15 years, but according to a 2016 review and consultation with its maker Lockheed Martin it could operate normally up to 2019.

“We do not rule out the possibility that we will no longer use Telkom-1. We will decide in the next few days,” Sinaga said, adding that the company may use the orbit slot of Telkom-1 for its fourth satellite scheduled to be launched mid 2018.