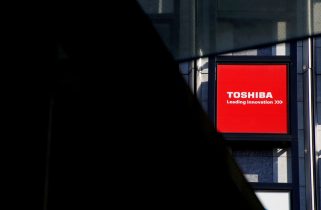 TOKYO (Reuters) – Proxy advisory firm ISS said on Wednesday it has recommended on that Toshiba Corp’s shareholders do not approve its earnings statements for the past financial year – the same day that the Tokyo bourse said it was taking the conglomerate off a special watch list.

The two developments offer very different views of the state of Toshiba’s accounting practices as the Japanese firm seeks to dig itself out of a financial crisis – the origins of which can be traced back to an accounting scandal in 2015.

Toshiba wants shareholders to sign off on its earnings at an Oct. 24 extraordinary meeting but the earnings have received a mixed review from its auditor.

PricewaterhouseCoopers Aarata LLC gave the report a “qualified opinion” endorsing Toshiba’s finances despite some minor problems, but made an “adverse” statement on Toshiba’s internal controls.

“It would be difficult to justify support for this resolution given the fact that the audit firm has rendered a qualified opinion, basically reflecting the auditor’s view that Toshiba’s financial statements are not accurate,” ISS said in a report.

The Tokyo Stock Exchange said earlier in the day that it would remove Toshiba from its “securities on alert” list on Thursday, adding that internal controls at the firm had improved. Toshiba had been placed on the list in the wake of the 2015 accounting scandal.

That scandal was followed by the emergence of billions of dollars in liabilities at its nuclear unit Westinghouse. It has since agreed to sell its chip unit to a consortium led by U.S. private equity firm Bain Capital for $18 billion.