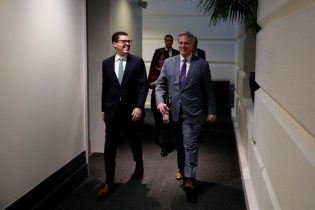 WASHINGTON (Reuters) – Republican leaders in the U.S. House of Representatives are working to build support to temporarily extend the National Security Agency’s expiring internet surveillance program by tucking it into a stop-gap funding measure, lawmakers said.

The month-long extension of the surveillance law, known as Section 702 of the Foreign Intelligence Surveillance Act, would punt a contentious national security issue into the new year in an attempt to buy lawmakers more time to hash out differences over various proposed privacy reforms.

Lawmakers leaving a Republican conference meeting on Wednesday evening said it was not clear whether the stop-gap bill had enough support to avert a partial government shutdown on Saturday, or whether the possible addition of the Section 702 extension would impact its chances for passage. It remained possible lawmakers would vote on the short-term extension separate from the spending bill.

Absent congressional action the law, which allows the NSA to collect vast amounts of digital communications from foreign suspects living outside the United States, will expire on Dec. 31.

Earlier in the day, House Republicans retreated from a plan to vote on a stand-alone measure to renew Section 702 until 2021 amid sizable opposition from both parties that stemmed from concerns the bill would violate U.S. privacy rights.

Some U.S. officials have recently said that deadline may not ultimately matter and that the program can lawfully continue through April due to the way it is annually certified.

But lawmakers and the White House still view the law’s end-year expiration as significant.

“I think clearly we need the reauthorization for FISA, and that is expected we’ll get that done” before the end of the year, Marc Short, the White House’s legislative director, said Wednesday on MSNBC.

U.S. intelligence officials consider Section 702 among the most vital of tools at their disposal to thwart threats to national security and American allies.

The law allows the NSA to collect vast amounts of digital communications from foreign suspects living outside the United States.

But the program incidentally gathers communications of Americans for a variety of technical reasons, including if they communicate with a foreign target living overseas.

Those communications can then be subject to searches without a warrant, including by the Federal Bureau of Investigation.

The House Judiciary Committee advanced a bill in November that would partially restrict the U.S. government’s ability to review American data by requiring a warrant in some cases.

(This story has been refiled to correct typographical error in headline)