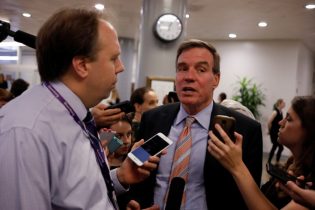 By Dustin Volz and David Ingram

WASHINGTON/SAN FRANCISCO (Reuters) – U.S. legislation may be needed to require social media companies to disclose more about how their platforms are used for political advertising, a senior Democratic lawmaker said on Thursday, after new signs of Russian efforts to influence the 2016 election.

Facebook Inc said on Wednesday that an operation likely based in Russia had placed thousands of U.S. ads with polarizing views on topics such as immigration, race and gay rights on the site during a two-year period through May 2017.

The world’s largest social network was already under fire for how little transparency it provides about digital political ads. Voters, researchers and journalists cannot see many of the ads politicians and interest groups run on Facebook to target certain groups, nor can they discover who paid for them.

“An American can still figure out what the content is being used in TV advertising. You can go look at the ad,” Warner, of Virginia, said at a security conference.

“But in social media there is no such requirement. So, you know, we may need a legislative solution,” he said.

Watchdog group Common Cause on Thursday filed a complaint with the U.S. Justice Department and the Federal Election Commission alleging that unknown foreign nationals made expenditures during the election in violation of American election law.

Warner, the top Democrat on the Senate Intelligence Committee, said he believed what Facebook disclosed was “the tip of the iceberg” and that Twitter Inc and other tech companies should also examine the issue.

Warner’s committee is among those investigating alleged Russian meddling and whether members of Trump’s campaign colluded with Moscow.

Facebook’s disclosure about Russian advertising created more questions than it answered, such as which candidates the ads supported and how savvy the targeting was, said David Lazer, a Northeastern University political scientist.

“Does it reflect sophistication and coordination, or did they throw $100,000 at this just to try a bunch of stuff?” he said.

U.S. election law bars foreign nationals and foreign entities from spending money to advocate the election or defeat of a candidate, although non-citizens may advertise on issues. Other ads fall into a legal gray area.

Television has been the backbone of political advertising for decades, and local U.S. broadcasters are required to disclose a wealth of details about the cost and schedules of commercials. The ads can be seen by anyone with a television provided they are aired in their markets.

Online advertising offered by Facebook and other platforms such as Twitter and Alphabet Inc’s Google, though, often targets narrow, carefully constructed audiences based on factors such as age, political preference or interests. Facebook is especially valued by advertisers due to its targeting capabilities.

Facebook and Google have, so far, declined to make political ads more transparent. They said on Thursday they were both open to reviewing specific congressional proposals.

Facebook also said it was continuing its investigation into possible nefarious activity.

Facebook briefed U.S. lawmakers on Wednesday and turned over information about the ads to Robert Mueller, the special counsel leading his own investigation into alleged Russian interference, a source familiar with the matter told Reuters.

Facebook Chief Executive Mark Zuckerberg said after the November election that it was a “pretty crazy idea” to think false news stories on the network tilted the election.

Since then, though, the company and other tech firms have taken a series of steps to address deliberately false stories or manipulation of traffic by bots. Facebook in April released a report on “information operations” on the site, including some aimed at influencing the French election this past spring.

The report on Wednesday expands on that and, for the first time, shows how paid advertising may have played a role in Russian influence efforts in the United States.

Much of the advertising on Facebook and Google is self-serve and can be easily ordered up through their websites.

“You can, from anywhere in the world, advertise to the entire world through the platform,” said Nathan Persily, a Stanford University law professor. “It’s incredibly empowering, but it doesn’t have all the regulatory trappings that a medium like television has.”